First off…if you’re an elementary school teacher and you’re not reading Joe Schwartz‘s blog, stop reading this, go subscribe and come back!  Great stuff!  It seems we are always diving into the same conversations with our teachers which is awesome!  Last week, the beast known as long division reared its ugly head again as teachers scramble to prepare for state testing.  A time when procedural understanding supersedes the conceptual!  Joe’s latest post perfectly explains the type of numerical reasoning that should be taking place in our elementary schools when in comes to division (before, during and after testing season).

Language plays an enormous role in thinking conceptually about standard division algorithm.  Most teachers and students are accustomed to saying “GUZINTA” which is hard to let go.  Traditionally if we were to do a problem such as 583÷4, we might say “4 guzinta 5, one time.”  Initially, this is mysterious to students.  How can you just ignore the “83” and keep changing the problem?   We NEED students to think of 583 as 5 hundreds, 8 tens, and 3 ones… NOT AS INDEPENDENT DIGITS 5, 8, AND 3!

This Kahn Academy video uses “guzinta” at least ten times and talks about bringing down another place value (ugh!).  We all know the rule:

I came across this context from John Van de Walle last week and tried it with a 4th grade class on Monday. The context served the math beautifully because it contains the place-value underpinnings of the standard algorithm for division.  My hope is that MS teachers jump on board this context. 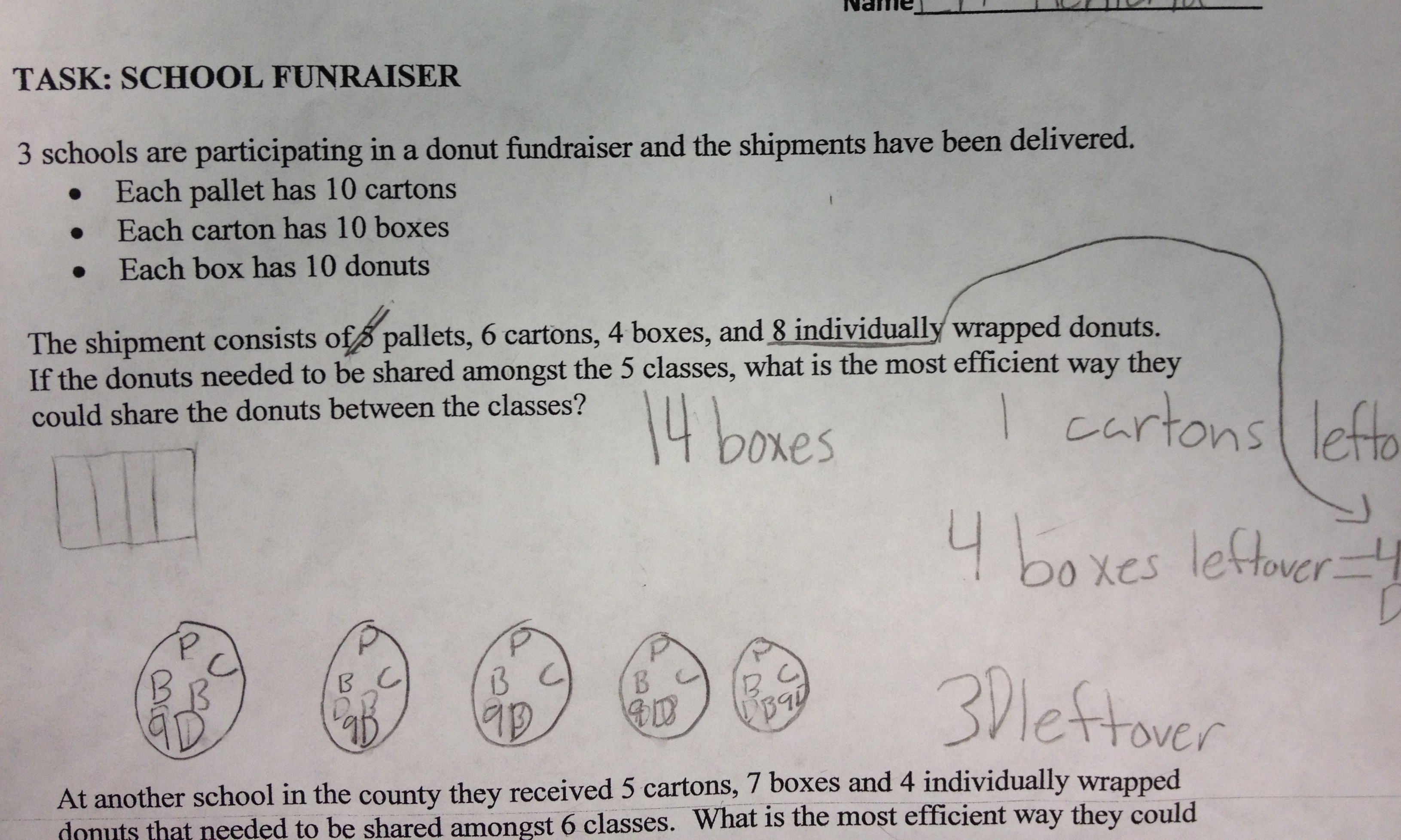 Base-ten blocks were made available to students but only a few chose to use them. (1000s block=pallet, 100s flat=carton, 10s rod=boxes, and 1s cube=a donut).  To introduce the task we had to clarify some vocabulary terms but after that …students hit the ground running.

Whether it was at school or at home, a different student had already been exposed to traditional algorithm but it was 100% procedural. I asked him to make sense of the algorithm using the aforementioned context.  My typing would not serve his thinking justice so please take a second and watch this video.

With CCSS, students are not expected to solve problems using the standard division algorithm until 6th grade (6.NS.2). We’re hoping that when a student from our school “guzinta” middle school they’ll conceptually understanding what they are doing!

Here is Joe Schwartz’s tape diagram lesson.  It was so good that I had to type it up!  4th Grade-SCAFFOLDING DIVISION THROUGH STRIP MODEL DIAGRAMMING