A number line, number string, and Number Talk walk into a class…

As teachers and students ramp up for testing I was invited to visit a 5th grade class and asked to focus on fractions.  Before the lesson, the teacher and I discussed the importance of a number line, which was an extension of a conversation we had a couple weeks back. We decided to start the lesson by throwing this on the board.

Everything went as planned. Students were able to determine and justify the correct location of each letter.

We accepted various answers for “C “and were thrilled that students could justify about the numerator and denominator being really close to one another.  Then we showed the next number line and the rest of the lesson went to “hockey sticks and handbaskets.”

Student responses for the location for “A” and “B”… 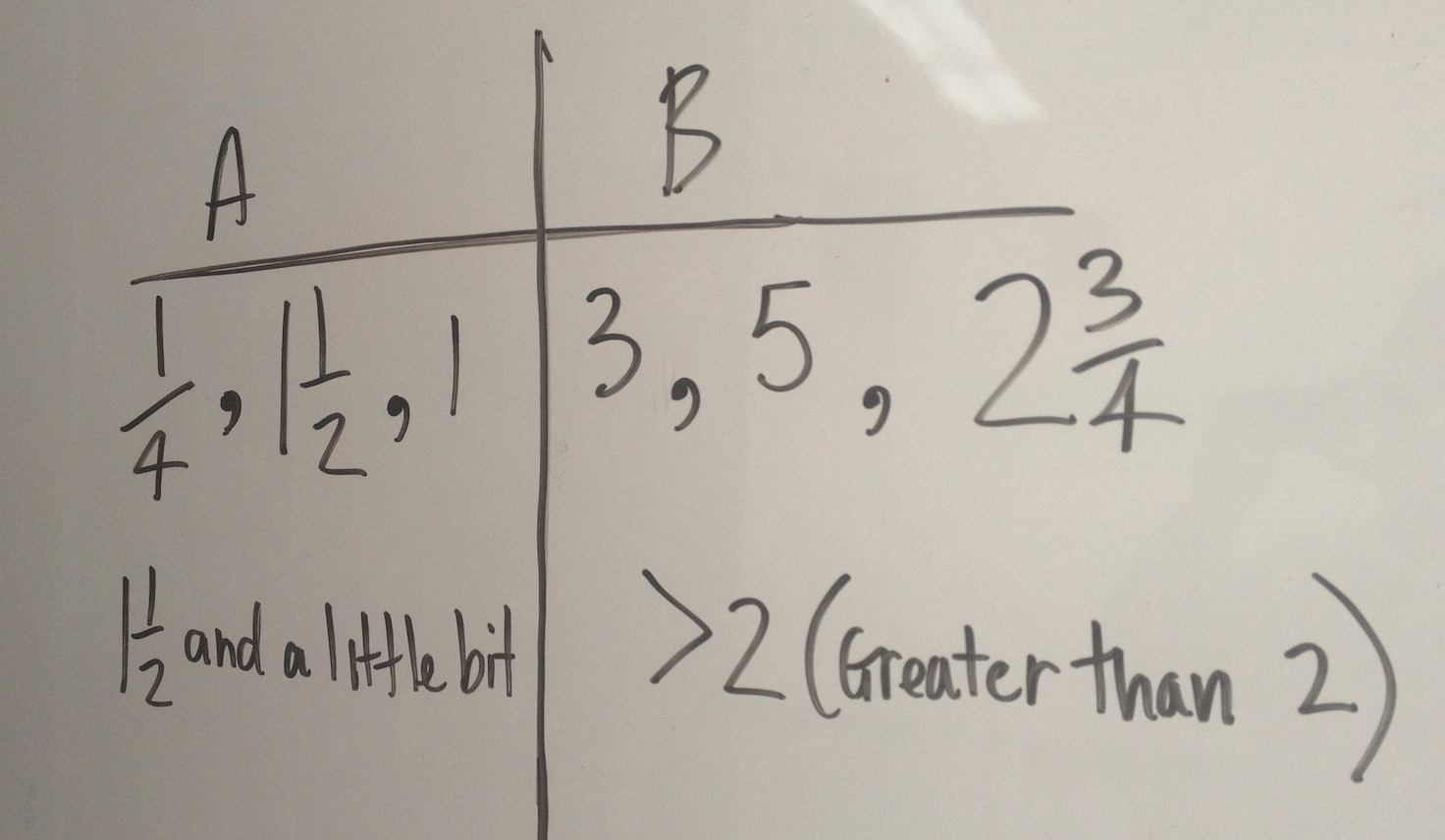 We blamed it on zero…or lack of it.

With the lesson plan out the window, we quickly improvised and went to a Number Line Number Talk.  I don’t know where it came from, we just made it up.  Number Talks promote fluency and strategy and we needed both things immediately!

Knowing that the majority of student understanding hangs on zero, we started there.

They nailed one-half so we went here…

Students: The number line shifted a fourth and the “x” is still in the middle, so the “x” shifts a quarter greater than one-half to 3/4.

Then we moved on and the same reasoning was applied to locate the “x” at 1 whole.

So far so good.  If SMP#3 was a person, he would have been proud of these students as they reasoned their way through the number line strings.

Then we dropped this one on them.

This one stung for a minute.

Students were given time to collaborate and discuss in groups about the location of “x”.

We went nuts. Kids went nuts. Math was happening and everyone was happy.  “We want another one!” was the chant around the room.

Not a problem.  So we moved on to this guy…

About half the class was immediately able to use their reasoning from the previous number string to locate the “x” at 7/8.  We picked up about another quarter of the students through the explanation.  Some students were completely lost a this point (note to self “see you in small group”).

Then we showed this one…

I’m not going to lie, about half the students were completely lost by the time we arrived here. What I loved most about this process was that students were still discussing and persevering!  That’s a winner in my book.

I was hesitant… but we did one more because they wanted it.

Because these number strings were created on the fly, students found an unintended pattern.

The students identified that if the pattern continued the denominator doubles and the numerator is double plus 1.  (Freakin’ nuts)

Me: So can we use what we just did to find out where “A” is located.  Anyone want to change their answer?

From the 24 students in the class, only 3 were able to make sense and repeat what the student shared.  We started with zero understanding and 1-hour into the opener we had 4 kids understanding and a ton of work left to do!