Against the Norm, Making Math Accessible, Teaching in a Context | 4 comments

Think about the majority of K-2 students and the thought process they go through when encountering a word problem. Normally they read the problem focusing solely on the two quantities and engage in a game of craps.  They throw the dice and hope that the operation they chose is correct.  In a K-2 classroom students will only use addition and subtraction which means they have a 50% chance of being right (assuming their computation is correct). 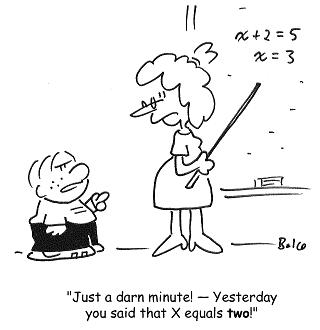 Jump forward a couple of years…the same group of students enter 3rd grade and apply the exact same strategy they used earlier. They read the problem, focus only on the quantities, and then throw the dice and play Guess My Operation. The only difference is their 50% has been reduced to 25% because multiplication and division are introduced. And then to top it off, the quantities that students have depended on for years are ripped away and replaced with “x”. Now they’re officially screwed!!!

So how do we break this cycle?  Take a look at the following equation and think of a word problem or context to match.

At first you might read this as “what number plus 8 gives me 13” but that’s not a context. Here’s an example of using the following equation in context: Graham had some apples. Jenise gave him 8 more apples.  Graham now has 13 apples.  How many apples did Graham have to start?

The ah-ha moment for me was that students can add or subtract to solve for the unknown. Students could use 13-8 or they could start at 8 and count on to 13. We need to purposefully start asking our students different types of problems that force them to focus on the context and not the quantities.  As teachers, most of us were only taught result unknown problems (a + b = □) which is the reason many of us have a “math word problem” phobia.  The idea here is to switch the position of the unknown variable and begin focusing on modelling and representing the context.  This is the whole concept behind Cognitively Guided Instruction which was authored by Thomas Carpenter, E. Fennema, M. Franke, L. Levi and S. Empson (these are some wicked smaht people!)

I originally learned about CGI and the different problem types while attending UGA 3 years ago and it has rocked my world since!  What I have found great about this approach is that students stop focusing on the quantities of the world problem and begin to grapple with the context.  This concept applies to larger numbers, as well as fractions, decimals, and percents for middle school.

As a school we have really focused this year on asking our students different types of problems (kindergarten through 5th grade).  We have been using a variety of problems where the unknown variable is in the start or change position and I am amazed at the outcome thus far.  I strongly suggest giving this a try.  As an added bonus you won’t need to waste countless hours or money on key word gimmicks and posters which is awesome…. because they suck anyways!!!

Graham has 9 apples which is 5 fewer than he started with.  How many apples did Graham have to begin?

“Fewer than” means subtract right?!?!?  Sure…let me know how that works out for you!

Keep drinking the Math Kool-Aid and stay thirsty my friends!